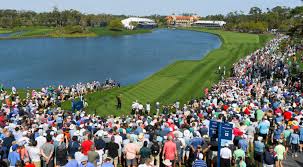 IT WAS at The Players Championship 12 months ago that the scale of Covid-19 finally hit home. The first round was completed in front of fans. It was then announced that the rest of the tournament would be played without fans, before play we wondered when we would ever see live golf again.

And that makes this year’s event all the more eagerly awaited. The strongest field of the year will assemble at TPC Sawgrass, with Rory McIlroy returning to defend the title he won in 2019. The two-time FedEx Cup champion, who recently missed his first cut since the 2019 Open Championship, will be joined by a host of international stars, including Jon Rahm, Tyrrell Hatton and Viktor Hovland.

McIlroy, will enter the 2021 event as the longest-tenured defending champion following the cancelation of the 2020 championship. The 31-year-old missed the cut in his first three starts here in 2009, 2010 and 2012 but has recorded four top-10s in his past seven appearances.

McIlroy has recorded eight top-25 finishes in nine starts thus far in the PGA Tour’s 2020-21 season. This includes a tied for fifth at The Masters in November. But he went through 2020 without a win and although there have been some flashes of his best form this year, he is still looking to end his drought. And history is against him at Sawgrass – McIlroy has never successfully defended a PGA Tour title and will be looking to become the first player to do so in the history of The Players Championship, behind him as quickly as possible. He began the day four adrift of 54-hole leader Lee Westwood but hit two drives into the water at the par-five sixth and was never a factor after that.

Rahm, a five-time TOUR winner, is coming off a 2019-20 season where he notched wins at the Memorial Tournament and the BMW Championship, and wound up finishing fourth in the FedExCup. While the 26-year-old has yet to win this season, he has recorded five top-10 finishes in eight starts, including a tie for second at the Zozo Championship last October.

He will be making only his fourth career start at the Players, where he has a pretty miserable record. His best finish was a tie for 12th when McIlroy won two years ago. That year, rounds of 69-68-64 saw Rahm go into the final day leading the way but a 76 put paid to his chances and saw him finish five shots behind McIlroy.

Hatton, who came to Sawgrass last year off the back of his first PGA Tour victory at the Arnold Palmer Invitational, has continued to climb the world rankings after victories at the BMW PGA Championship and this year’s Abu Dhabi HSBC Championship.

The 29-year-old Englishman will be making his fourth career start at Sawgrass. He has made the cut just once, finishing T41 in his 2017 debut. Hatton has yet to break 70 in eight career rounds at TPC Sawgrass. It is a safe bet he will be improving upon that record this year.

Viktor Hovland will effectively be making his tournament debut after playing just one round last year. The 23-year-old Norwegian won the 2020 Puerto Rico Open and Mayakoba Golf Classic and is one of the hottest properties in the game.

Hovland finished second at both the Farmers Insurance Open and WGC Workday Open and fifth at the Genesis Invitational. He looks like he can win every time he tees up and his greatest weapon is his temperament. When things go wrong – and the nature of this game means that things do go awry often – Hovland simply smiles, shrugs his shoulders and moves to the next hole. He ran up an eight at during the second round at The Concession but simply took it all in his stride.

There are those who say that his short game is not good enough to compete at this level; his results suggest otherwise. He would probably admit that he is not the best chipper in the game and it is an area he has been working on. But don’t worry about him. He will be a key member of Europe’s Ryder Cup team and he is a certain major champion of the future.

Justin Rose, Matthew Fitzpatrick and Paul Casey also all have an eye on the Ryder Cup. Fitzpatrick keeps putting himself in good positions. Although he is one of the shorter hitters he possesses a world-class short game. He is also one of the best putters in the world. There are times when you feel that somebody needs to tell Fitzpatrick that he needs to remember to enjoy what he does. Hatton has found a way to laugh at himself. Fitzpatrick needs to do the same.

Needless to say, the likes of Dustin Johnson, Justin Thomas, Xander Schauffele, Daniel Berger, Patrick Cantlay and Patrick Reed will have something to say about the European challenge.

Viktor Hovland. If his putter is hot he will be hard to beat