How Do I Stop my Push Slice? 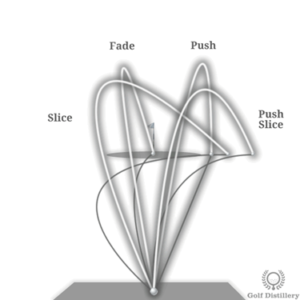 What is a Push Slice in Golf?

Let’s dive into the main piece first, the slice. Whether you are right handed or left handed a slice is caused by hitting the ball with a swing plane that cuts from outside of the ball to inside, towards your body. This creates a side spin effect on the ball, which is exactly what gives it that mean curve off the face instead of going dead straight like the pros on TV. Now the push is not as big of an issue when separated from a slice. However whenever the two are combined into a push slice, it is certainly a deadly combination.

A push is simply when the ball comes off straight either to the left or right side of center. So it is not a big deal individually as you may only be off target by twenty yards or so, but as mentioned the combination of a push slice is what kills golfers worldwide.

What Causes a Push Slice in Golf?

Now we already gave you the secret to a slice above, swinging across your body instead of a straight swing. This tendency is much more common in first time golfers, and especially ones who have had previous experience with baseball. In baseball or softball, you learn to swing across and around with your hands, which usually means coming outside to inside. So that natural tendency can certainly cause a large slice when first beginning golf.

Although understanding what causes a push is definitely not as easy as picking out the causes of a slice. Instead, the causes are so minute to the average eye, that it may take a golf professional or a slow motion video recording to identify the causes. But nonetheless, we have simplified the most frequent causes into this bulleted list down below, in no particular order:
● Teeing the Ball Back Too Far in your Stance
● Too Much Forward Lean/Shifting Weight Backwards on Downswing
● Standing Too Far Away From the Ball

Lets answer the question you have all been waiting for. This section will be divided into three parts, however no one part is necessarily more important than the other. They are just all things to think about next time you step up to hit a golf ball. It is also important to understand that these are very general fixes/advice, and are not tailored to any one individual. So unfortunately they may not be the best fixes for you. But here they are!

1. Teeing the Ball Back Too Far in your Stance
Now this is not a way to fix your swing plane, but is just something to think about whenever you are hitting. A general rule of thumb for all shots, BUT A DRIVER, is to have the ball in your stance about two and a half balls back from the middle of your front foot. However for a driver it is recommended to have the ball placed just on the inside of your front foot. This is due to the extra club length that comes with a driver.

Now this is important to combatting a slice. Having the ball two far back in your stance will most likely mean the clubface is open at impact. Remember we discussed, having an open club face is exactly how you put that ugly side spin on the ball, and is not what you want. So next time just think about where you put the ball in your stance, but this might not be enough to fully fix the problem.

2. Too Much Forward Lean/Shifting Weight Backwards on Downswing

This issue is really what causes the push piece of the push slice. It begins with too much forward lean, and is counteracted by shifting all your weight back on the downswing. Not only does this take away from your power, but it causes you to really push the ball all with your arms. Similar to pushing a box, your legs are away from it for support while the power is really through your arms. Now the fix for this will sound really simple, but feel really weird whenever you are implementing it on the course.

Try to keep your lower body as still as possible. CAUTION- this is NOT something to do permanently, it is just a recommended quick fix until you can get your lower body back under control. Just keep it stable and let your arms do the work. The side effects may be a continued slice, but the push should be eliminated.

3. Standing Too Far Away From the Ball
This may seem like the simplest problem and fix, but it is actually one of the more common ones. It causes and allows people to have that out to in swinging motion which directly causes the slice. Although it is common, because people are used to swinging out and around, not up and down on a plane. Therefore they stand further away to allow themselves to swing around instead of up, which is wrong of course. For a tip on how far to stand away from the ball, try this. Simply line up the club head behind the ball, lay the butt of the shaft on your mid thigh, then pick up the club and maybe adjust a hair to make yourself comfortable. Overall this is another overlooked step that is actually quite common.

So, in this article discussed what a push slice was, what causes a push slice, and the possible steps to take to fix it.

If you have any questions then please drop me an email to getgolfing.ie@gmail.com