By MarkNovember 7, 2022No Comments

The article discusses Mark’s journey from Telford in Shropshire, England to how he found himself in the golfers paradise of Killarney, Co Kerry, South West Ireland and a few hiccups along the way.

Heinemann came to Killarney Golf and Fishing Club in January 2002 and twenty years later he has become a golfing legend in the town.

A jack of all trades, Heinemann has become an elite golf coach while he is also a master craftsman when it comes to repairing clubs proving the old methods still have a place in the modern game.

The Head Professional began his golfing career as an assistant pro in Shropshire Golf Club in 1992 before completing his PGA qualifications in 1999 alongside David Drysdale and a certain Ian Poulter. While searching for a job he came across an ad in the PGA magazine to work as assistant to Tony Coveney and he decided it would be just the ticket.

A brave leap for a youngster in November 2001 and little did he think he would still be there two decades later.

“I actually had an operation on my left foot so I arrived wearing a surgical boot and had to lend a size-12 shoe from a friend of mine,” explained Heinemann. “Tony wanted me to hit a few shots and safe to say I didn’t hit the ball my best but he called me back three weeks later to say we would start in January 2002.

“In one of my first ever rounds in Killarney with one of the senior members he said to me. ‘You need three things if you are going to live here: a set of golf clubs, a bicycle and a boat,’ so I have all three. If you have those three things in Killarney you are sorted.” 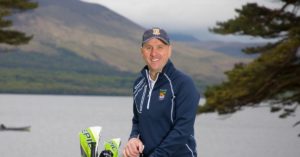